Saint Behind the Glass

Screen to screen to screen has been my life this past month — my work laptop, augmented by my personal laptop, and then my desktop, when the workday is through, followed by some viewing on my laptop again. I am privileged to be able to work from home and to live in a co-op building which is well-maintained. But as I have revealed, I have taken to gazing out my window. 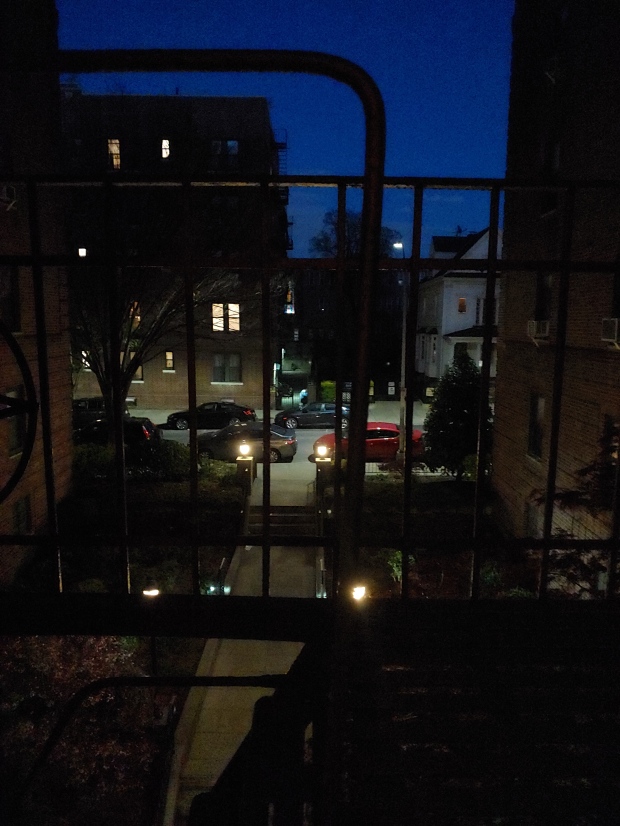 Now straight ahead, dead straight, to the left of the streetlight and to the right of the bright window in the building across the street, you can see a bit of colored glass. There. You see it? Had I an actual camera (instead of a phone) or were I a better photographer, I could capture that image — the streetlight, the stained glass of the Ukrainian church beyond.

Last night, I attempted it. The bars of the fire escape were too intrusive and the zoom on the cell phone camera wasn’t sufficient, so I climbed out on the fire escape and did my best. 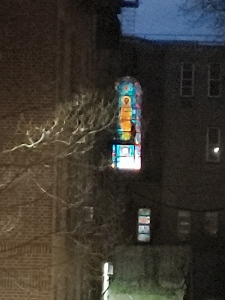 This yellow-robed Ukrainian saint has been gazing into my living quarters for the past 20 years, but I only thought to think of it now. Of course, I was aware that there was a Ukrainian Orthodox Church a block away — I have photographed their fete on Ukrainian heritage day. Beribboned children in native costume dance all afternoon in reluctant troupes. Ornately braided girls and grim embarrassed boys prance and clap on a wooden platform in front of the church, to the blaring of recorded accordion and clarinet music. A street block is roped off from traffic to allow for tables selling embroidered goods and meat-stuffed pastries, and chairs for the parents of those mortified, loyal prepubescents.

These wares, these performances, are not meant for the likes of me. I don’t know the difference between Greek Orthodox and Ukrainian Orthodox but I know neither proselytizes. Far from it. It is from the Greeks that we get the word “xenophobia,” from the Greek xenos meaning “foreigner” or “stranger.” Also, “barbarian,” which originally meant “a person who does not speak Greek.” (Non-Greek sounded to Greeks like someone saying “bar bar bar.”)

After twenty years in Astoria, I was not keen to insert myself where I was not welcome.

It took a pandemic to make me realize that the church I look out on every day was not merely a church, but a religious residence. The low tan building I look out on (and appreciate, since it affords me sunlight when a commercial building would not) is not just extra church space, but a dormitory for the order.

Just across the street, priests pray for us. Perhaps even for me. Perhaps they turn their gaze from the saints on their walls to the meager view from their windows and ponder the mystery of the moon-faced barbarian clamoring around on her fire escape trying to photograph them in the dark.

I took photos of their featured saints, Josaphat and 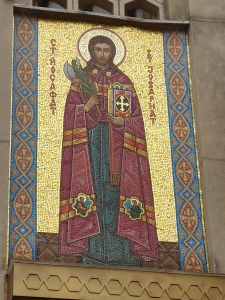 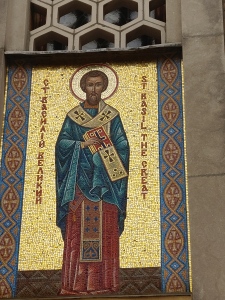 , an individual I would now like to know more about. My cursory research tells me Basil the Great seems pretty great.

I decided, since I was out already, I may as well take a walk around the block. (I was masked; it is mandatory.) I turned the corner and saw a man in prayer, kneeling on a piece of cardboard to ease his knees, his hands placed on the wall of the church building, above his head, like a man surrendering to police in a shootout. In two decades of passing that church, I have never seen a person praying to an outside wall. But then, in those same two decades, the church has never before had to lock its doors.

As I passed him, I heard him praying in a language I did not recognize. I thought of taking his picture, but how intrusive. I furthered down the street and saw over a driveway and garage behind the church (how had I never before registered that the church owned the driveway and garage?) my own building.

We have looked out on each other all this time.