The Canterbury Tales: The Witch’s Tale

Perhaps fittingly, I arrived in Canterbury footsore, as Chaucer’s pilgrims did. I had spent three days in London, which was an overcrowded madhouse, and I say this as a New Yorker who works in midtown. My day trip to Cambridge did little to alleviate my stress, as I raced from my centrally-located (and well paid-for) hotel to get to the tourist office. I arrived at 4:54 to find my way barred by a teenager. “We’re closing,” she said. (The office closes at 5:00.) I managed to secure a $5.00 map off of her begrudging self, to attend an Evensong service at Kings College, where my Episcopalian confirmation training kicked in enough to keep my standing, sitting and kneeling in all the right places.

Dinner at my pricey hotel, and then to bed. I awoke to the sound of water rushing, and nearby dripping. Well, it was England, I thought, so rain. But no, the dripping was too close, so I investigated and discovered water dripping from the ceiling in my bathroom. Not a drip-drip-drip, but several streams of dripping, forming a syncopation of rhythm. Also, a crack was forming in the ceiling, just above the toilet, so when I sat, as one must, my head was soaked.

I called the front desk, who said, “OK, we’ll send someone up in a minute.”

Two hours later, daringly showered and packed, I arrived at the front desk. As I mentioned, this, the Hotel du Vin, was meant to be my splash-out hotel, not my splash-on.

“It’s an old building,” said one of the concierges.

“Right, well, there are cracks,” I said. Both concierges, not natives of England and recently enough departed from their teenaged years to remember the masks of eye-rolling forbearance, as in how big a deal is she going to make of this? “Look, it’s your building,” I said and watched their expressions shift to something akin to (had they been actual Englanders) well that’s just it, innit? Not our building, is it?

“That water damage is not going to stop,” I offered as my parting salvo. “Could I leave my bag here, please, until I leave for the station? By the way, is there a bus that could take me to the station, or should I just call a cab?”

“You can walk,” said the other concierge. “It’s an easy walk. Ten minutes. I’ll draw you a map.”

She drew the map, but perhaps a punishment for complaining about water pouring through the ceiling, I was sent on not an easy walk. I was by then walking 8-10 miles a day, so not quite a softie. However, my bewildered exhaustion drew the attention of a nice minister and her husband, and conversing with them shortened the (admittedly beautiful) train ride to London. I was afraid of coming off like a chatty American, because Brits think all Americans are chatty, and I’m chatty to begin with, but I learned a lot about them: that he had proposed to her in New York, at Ground Zero when it was still a steaming pile of rubble (I didn’t enquire why they went there; I will never understand why tourists do); that she used to be the minister in a men’s prison, until she had kids; that they had two kids; that they were having a romantic weekend in London and that this to them was made manifest by taking in the Harry Potter play. 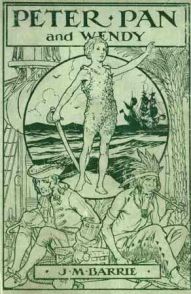 So off to Canterbury on the high-speed train, I maintained British silence until I could stand it no longer. “Why is this train so crowded?” I asked the young woman in the next seat.

“Seems a bit of a slog,” I said, although I realized that several of my co-workers do virtually the same commute, and they do it to live in crowded Long Island, not in a verdant countryside, caressed by swollen clouds.

“Kent,” said the young woman when she saw me press my fingers against the window. “You’re in Kent.”

By the time I reached Canterbury, it looked as though we were in store for serious rain. It had only rained once during my English vacation, and at the time, I was in the British Library, having a coffee, watching the lightning fork the sky.

Now pulling up in front of the Ebury Hotel, I only hoped it wouldn’t rain just then, because the Ebury was far further out of town that I had reckoned and I was still holding out the hope of a decent meal in England.

“It is only a short walk into town,” said the hotelier, Matthew.

It was only a mile, after all. 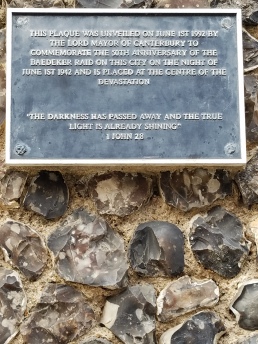 This monument met me just inside the city walls, commemorating the bombing of Canterbury during WWII.

I settled in on the patio of the “very good” French restaurant Matthew had recommended (it was a chain), and it was there that I met the witch.

The patio faced the cobblestoned court square of the town. In the twilight, pre-teen boys practiced, and failed at, their skateboard tricks. Failure meant that the skateboard sailed one or two feet into the air and then clattered to the cobblestones in a manner that the black-haired woman sitting at the corner of the patio with her husband found distracting.

“People come here to relax,” I overheard her telling the waitress.

She complained about various other things in a manner which made me want to apologize to the waitress (my therapist and I have yet to heal me of this compulsion). But then, bells chimed and I raised my head like a rapturous idiot, like some peasant girl in a movie on her journey to sainthood, played by Jennifer Jones or Ingrid Bergman, hearing the voice of God.

“Is that the Cathedral?” I asked, so dumb and humble that the husband took pity on me, and then so did the wife. Too bad I had come at such a time, they told me, the Cathedral was undergoing renovations. If I went the next day at Evensong, I wouldn’t have to pay to get in. How long was I here for?

When the wife went to the restroom, the husband told me that she was an artist. She’d earned her art degree here in Kent, and then her master’s in London. We then ate and drank privately until a particularly loud clatter of skateboard startled us back into a community.

I shook my head at the sound.

“I know!” cried the wife. “Why must they do that! Paint a picture! Write a story!” 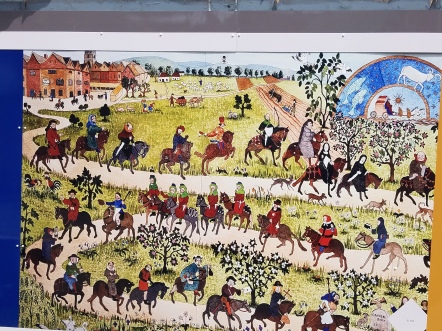 Paint a picture! Write a story! An illustration on a sign outside Canterbury Cathedral

Well, I for one thought they did that because they were ten-year-old boys, and for a ten-year-old boy, mastering a useless physical skill is its own delight. But since she said, “Paint a picture,” I went to her, unwisely emboldened by the wine I’d drunk, the miles I’d traveled, the nice minister on the train, the orgiastic fairies of Peter Pan, the ardent Miss Kent . . .

I showed her my push-pin art on my phone.

She took my phone and began swiping. 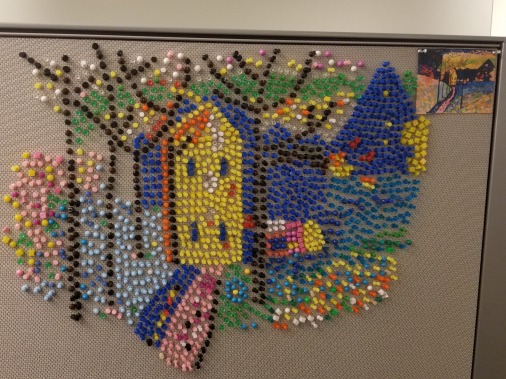 “Am I meant to take this seriously?”

“I just do it for fun,” I said. “It’s relaxing. I work in a cubicle farm. My colleagues like it, and I’ve learned a lot.”

And here I confess to an is-that-the-Cathedral level of stupidity. The hostility in her tone was rising like a cobra ready to strike and I should have backed away.

“Oh, you know. How to direct the eye. How to saturate color, how to diffuse it with clear push-pins. I’m limited, you know, because I’m dealing with push-pins . . . ” I laughed but her eyes were by then slits.

“Look, do you want my honest opinion?”

Again, that question never leads to anything good. It never leads to I think you’re the whole package and the only one for me or this is the best manuscript that’s come across my desk in years or no, actually, that skirt makes your butt look quite flat.

“I think it’s absolute crap,” said the woman. “Absolute crap. This paint-by-numbers nonsense, this . . . ” Swipe, swipe, swipe. “Crap. Crap. These people, these people with no training at all, who think they can just . . . I don’t mean to upset you. But it’s absolute, utter crap!”

“It’s just for fun. It brightens up the nine-to-five.”

I wasn’t. My therapist and I have managed to heal this compulsion, of becoming upset because other people are upset. Push-pin art has been to me like those desktop Zen gardens that were popular awhile back, or like a scavenger hunt of the mind. One’s resources are very limited. Even in a mosaic, the artist can shape the tessera (the name for an individual mosaic piece, for you crossword puzzle enthusiasts) but push-pins are almost always round. They come in only a few colors. The challenge of how to re-create a certain visual impact through a standard-issue office supply has been a soothing challenge to occupy me while I try to tease out solutions to the problems of my day job. The cubicle murals, in fact, had attracted so much congregating at my desk that I had decided to cease operations, even before this encounter.

“It’s crap. Crap. I don’t care how many Instagram followers you have.”

“I don’t have that many, actually.” Gently, I reclaimed my phone. Her husband had been laughing this whole time. “I’ll leave you alone now. Enjoy your dessert.”

Walking back to the hotel, I reflected on how many times she had snapped “I don’t mean to upset you!” when upsetting me was clearly her aim. Amateur comes from amator, Latin for lover, and I did my push-pin art because I loved it. But there was no ego in it.

And that woman’s rage definitely came from ego. I tried to think of what occurrence, in my own field, would inspire a similar spite from me.

Maybe someone getting a three-book deal from a publisher based on a joke tucked into a fortune cookie?  But would I say crap two dozen times?

But there was no money involved, no fame, no acclaim. Just me messing around with the masters using push-pins. I couldn’t figure it out.

The next day, I realized she must have been a witch. The kind the heroine meets on her journey in a fairy tale. The kind who tests her.